This is a re-post from January 2010...with changes that have occurred since then...J-44 was about a year old when I first wrote this.

...he was first seen February 2009, in the Strait of Juan de Fuca...
I remember seeing one of the first images of J-44 (Center for Whale Research photo) and this calf's very unique eye patch...a friend commented that it looked like a sperm whale...here is an image I took while out with Capt. Jim in November 2009...in the distance was J-44 and mom...look at the lower front of his eye patch, it does resemble the mouth of a sperm whale... 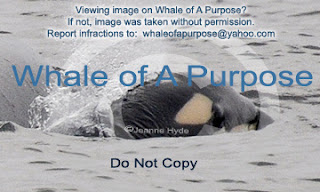 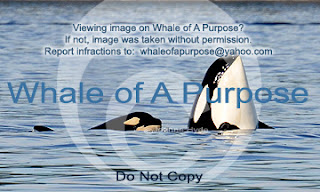 here are some...
Whale Trivia Relating to J-44
J-44 is 11 years younger than his closest sibling Tahlequah J-35. As far as I can tell by looking at the Center for Whale Research Official Orca Survey, since the studies began there is only one other sibling pair in the SRKW community who surpasses that time frame. That would be Nugget L-55 and her younger sister Surprise! L-86. They were born 14 years apart. Lobo K-26 and Yoda K-36 are close at 10 years apart and Racer L-72 and Nigel L-95 are also 10 years apart.

How many years until the next possible 3 generation family in J Pod?
The following are the only females currently in J Pod who could make that happen (and mom would still need to be living):
-as of April 2013:
Alki J-36 is 13 years old.
Suttles J-40 is currently 8 years old.
Eclipse J-41 is almost 7 1/2 years old.
Echo J-42 is almost 6 years old.
With an average age for first time birth being 14 years...Alki may be next to join the 3 generation distinction list.