Wednesday, October 2nd
...another one of those sightings this morning - two whales, no direction...so off I go...I pull in...phone rings...I'm talking...and then 'explative!'...I don't know why I keep thinking I'm not going to see them...mainly because where they are when I hear about it should be at least 45 minutes away...not!...not when there are way more than two whales present...
...I got one picture of who I was sure was Lulu L-53...it was...I saw other whales spread out but heading offshore...and then they disappeared...glad someone else found them!
...out on Maya's Westside Charters for an afternoon trip...hoping the rain would stay away...
...the dog boat (Conservation Canines) the dog on it today was 'dressed' in red...
...notice on the Conservation Canines site that Tucker 'wears' yellow...
...the three dogs they use are black, two wear RED and one wears YELLOW, so when I saw Red I immediately thought of Sadie or Pepsi... 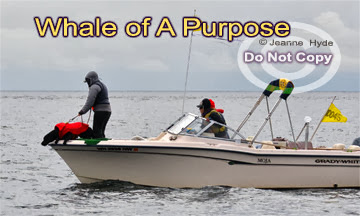 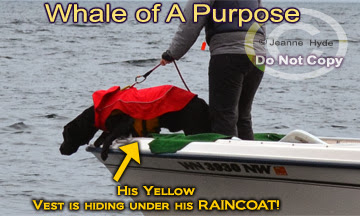 ...from now on, on rainy days he shall be called
Tucker the Undercover Dog! 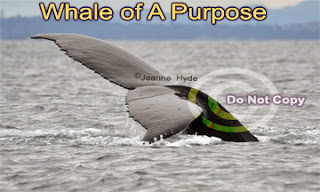 ...some on the boat were asking the Capt. to rate the trip...and I said if I had a pic with a humpback and killer whales in the same frame the rating would go way up...well...I didn't say they would be side by side, but they are in the same frame! 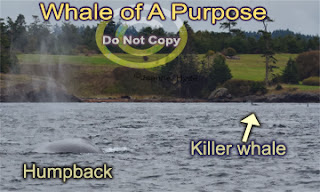 ...the humpbacks moved off from where we were and left us with the killer whales...
...not sure who this is, could be Lobo K-26 from the looks of that dorsal fin...I did see him during the afternoon... 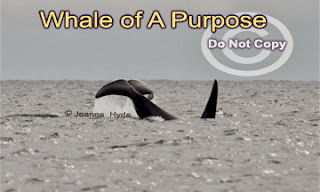 ...this young fella was much closer... 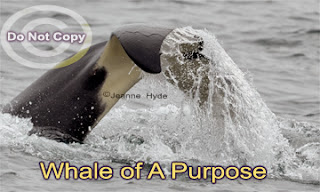 ...looked like he had a 'money shot' like they say about the humpbacks when the water is dripping off their flukes...not only was my timing off we were on the wrong side...still, it works... 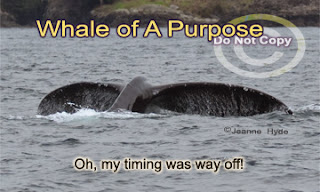 ...I caught a glimpse of Granny J-2 as she was up ahead and going away from us...Onyx L-87...lots of other J pod whales, both Group A and B...lots of K pod whales and lots of L pod whales...were they all present??? I couldn't answer that question, but it sure was nice to see them today...

...I keep watching where the whales are going...one day they went only part way in the Strait of Juan de Fuca and then turned around and headed back out...today they came up past the lighthouse and then turned back...both times they were spread for miles foraging...what does that tell you?

This is not good.
This has gone on most of this season, except for a few weeks in September.
Just because there were a few weeks does not make up for the lack of food for these whales the majority of the year.
Don't be fooled by generalizations.
Watch what the whales are doing, because they are continually telling us.
But we have to listen to them.
And we have to pay attention to the dwindling numbers of salmon, something that has been going on for a long time and is yet to be acknowledged and dealt with in a way that will help the whales.

They were here today.
Maybe they will be here tomorrow.
But don't forgot they were hardly here all summer of 2013.