Sunday, March 27th
...early morning word - whales seen near Orcas Island ferry dock...
...Tom from Deer Harbor Charters reported that it was some members of J Pod!
...like wow! - they didn't all go out the other night...
...it was Princess Angeline's J-17 and Oreo's J-22 families...
...they are the whales who had gone up Trincomali Channel on the 24th...

...this is the most pronounced J Pod split since 2010 when they separated into two groups...after they had continued that split, I started calling them Group A and Group B because it was easier than saying/typing their names every time...
...this split is different!
...it's a 'wait and see' time for what occurs next...from hearing where they were last seen today, it looks like they might be heading back up...maybe they will make a big loop and be seen off the ferry again in the next couple of days...
...maybe ferry ridership will increase :)  !
...on Peregrine with Capt. Jim over near Blakely Island...inland waters...they had gone east to Blakely and back again...someone said the whales passed the Orcas Ferry terminal three times...they eventually went through Pole Pass - a very, very narrow place - heard about that from David of All Aboard Sailing...he said it was awesome!...they headed west in Spieden Channel and angled back to the north...but did they end up going north?...no telling where they will show up next. 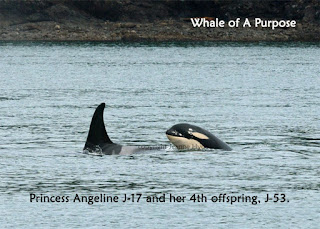 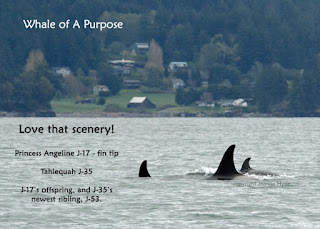 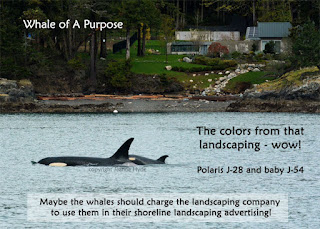 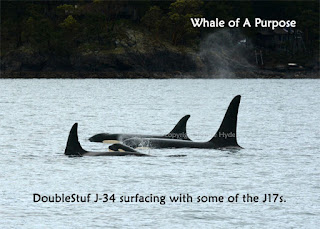 ...here's a few minutes video clip of them today...

...I remember last year the J16s with their two new babies spent time away from the rest of J Pod.  It appeared they were doing that because of the two young ones - less travel, more rest.
Maybe that's why the J17s stayed in and with them the J22s for added support. The J17s have three adult females, three 5 to 6 year olds, and the two babies. The J22s have one adult female, an 18 year old male, and a 12 1/2 year old male.
...Enough food to feed this size group while the rest of the pod went west in search of enough food to feed them.
Don't know but just a thought.
...we won't know what, if anything, is going on with them until something, if anything different happens...now doesn't that make a lot of sense!  ha!
Posted by Jeanne at 9:55 PM