Sunday, April 15th
...the hydrophones had been down from 9pm April 12th until the morning of April 14th...could J Pod or others have come by during that time - we will likely never know...
...so at 1:00 a.m. (middle of the night) Transient calls woke me up...they lasted about ten minutes...so when I got an invitation to go out on the Western Prince today, I thought "why, yes!"...I didn't expect those Ts would be located because it was eleven hours later when we left the dock in Friday Harbor...
...but with no wind, not much sun, and no rain (which was on its way for Monday), it would be nice to get out on the water...
...there was a report of a possible baleen whale off the the southeast, so we headed that way...well, we ended up being in the right place at the right time...never did see a baleen whale, but one of the captains notified Capt. Michael that there was a large group of killer whales headed our way!
...need I say more?!
...what a day!  We had heard about the new baby of, mom, T65A...and here that little one was! 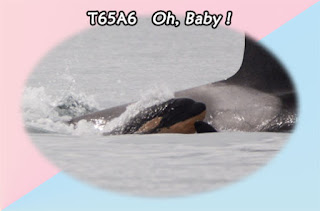 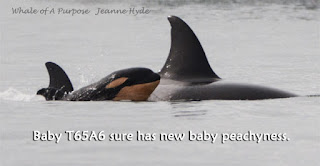 ...there was another baby, born last November whom I hadn't seen-belongs to the T49As - well got to see that baby today too... 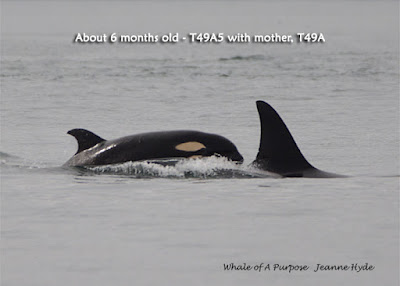 A friend suggested that maybe mom was having a baby so he had disbursed.  She might not have realized at the time that she would end up being right! This was yesterday and T65A3 is right in there with all his mother and younger siblings. T65A2 was present too, just not in this surfacing sequence. 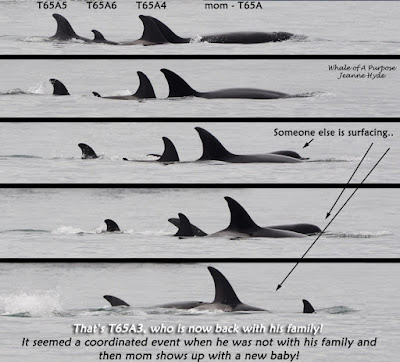 Today the four families T36As, T49As, T65As, and T123s were traveling pretty tight, so not everyone would surface at the same time.

...more to come, but here are a couple more images from the great encounter we had today...Thanks for the invite and to Capt. Michael, Katie and Elah and all those passengers for wanting to take a trip on the Western Prince today - WOW! 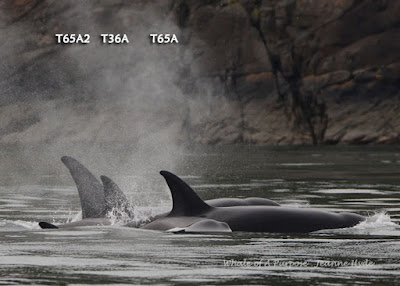 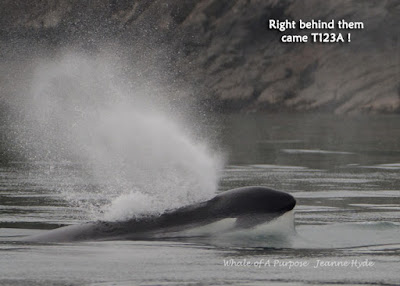 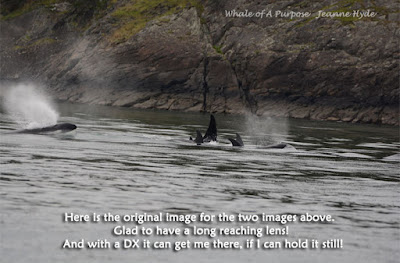 Notation: T49A1 had disbursed from his family early in 2017(some time after April)...his mother had a baby in November of 2017...it will be interesting to learn if he stays with his family now...I think it is more common for 1st born males to stay with their mother and subsequent born males to disburse...but that's what we think, not necessarily what they do...
Whether Southern Residents or Transients, they have a complex social structure, much more than most might think.

What might have gone on here? communication, coordination, meeting times and locations...and who knows what else might have been involved in this event...at least that is what I think.
The whales don't just wander around and bump into one another along the way...well, maybe some do, just like us when we 'run into someone' we haven't seen in a while...

...but this was an event..
...so glad to get a glimpse into their world today.

...another note about coordinating:  there was some KOMO 4 (I think) helicopter video taken of the T137s in Puget Sound on April 9th...though it was not always easy to tell if they were actually directional or not...they looked like they were just waiting around...
...and sooooo...when Orca Network posted some images, that were taken by someone on April 10th, of the T137s approaching the T65As and that new baby T65A6 was in the image.


Now I wonder even more about the
whales coordinating with each other.